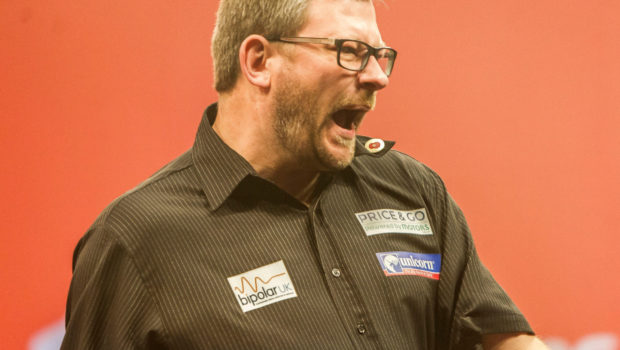 #TeamWade who had travelled to Las Vegas to watch ‘The Machine’ live on stage in the William Hill U.S. Darts Masters at Mandalay Bay and the Wadey fans watching on ITV from the comfort of their sofas were not disappointed this weekend as James, threw some great darts all the way to the semi-finals.

The Machine proved he still has what takes producing one of his most dominant displays on the World Series stage at the quarter-finals.

James took an initial 5-0 lead over Michael van Gerwen and went on to deliver a crucial 161 finish to beat the world number one with an 8-3 victory.

It was game on in the semi-finals against Gary Anderson with James leading 6-2 before Gary levelled the playing field and it was back to our famous left hander to take it to 7-6 up.

As Wadey narrowly missed a 140 checkout and victory, it was once again neck and neck 7-7 before Gary took the deciding leg.

It was all the way to the finals this weekend for James in this year’s European Darts Grand Prix held at the Glaspalast Sindelfingen Arena in Germany.

Play began for James on Friday evening, where he saw off Max Hopp 6-4.

Success continued for James on Saturday evening, where his 6-4 win against John Henderson secured his place in the third round.

There was no stopping Wadey, who was on top form as he beat World Champion Rob Cross 6-5.

A 6-3 win in the quarter finals against Simon Whitlock and semi-final success against Danny Noppert 7-3 meant it was Wade v’s van Gerwen in Sunday night’s final.

A similar picture from last weekend’s semi-finals in Wigan, the two world top players took to the stage once more. Fans were on the edge of their seats following a tense start and a game which saw some impressive darts from both players.

A magnificent 121 checkout on the bull from James brought fans to their feet, but it was Michael’s 161 finish that clinched the title.