0
By tanya@tanyabarnes.co.uk Posted on November 5, 2018 in James Wade News 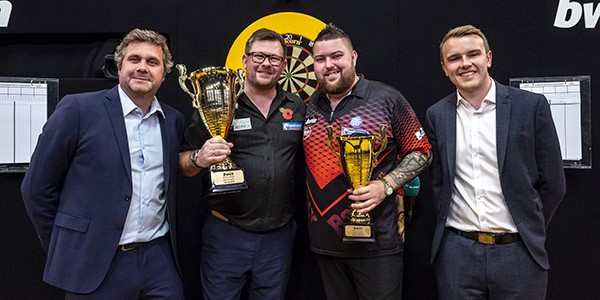 What a week it’s been for James Wade, his family and #TeamWade fans around the world.

Following on from his success last weekend in Austria, where he was named European Champion.  James went on to win his second major title this weekend at the bwin World Series of Darts Finals at the Multiversum in Vienna.

As play began on Friday afternoon for James it was a 6-3 win against Ross Smith that saw him safely move through to Saturday’s second round match against Mensur Suljovic and another 6-3 win to make it through to Sunday’s final day.

As the stage was set for the quarter finals it was James’ 10-5 win against Jamie Lewis that had #TeamWade fans believing that he could be bringing this home again.

As the semi-finals approached it was Wadey v’s Barney, following Raymond’s success and a 10-8 win against Michael van Gerwen in his quarter final match.

As they stepped up to the oche, our left-handed champion proved to the world of darts, he truly has new found motivation and a determination to reach the top with an incredible win 11-2 and a ticket to the finals once again.

As the scene was set it was fellow Englishman Michael Smith who was to be James’ opponent for the final match who, like James, had played some incredible darts over the course of the weekend, making his own way through a who’s who to reach the final stage.

As the match began, you could hear the cheers as James took an early 3-0 lead.  Michael then proved, he too meant business, levelling the playing field to 5-5 at the second break.

As the legs continued, once again it was neck and neck at 7-7 before James landed a 112 check out to take the lead 8-7. Michael responded and went on to take the lead for the first time in the match 9-8.

As the final legs of the match began, it was clear that both men were determined not to give up without a fight.  James was to lead the charge and turn the final back around breaking Michael’s throw to take a 10-9 lead.

As the competition was drawing to a close it was an incredible end to the match when James bust 121 and Michael levelled 10-10.

It was the gripping final leg that then brought fans to their feet and home and abroad – it was just too close to call and then… Wadey did it… double 18 for the win! 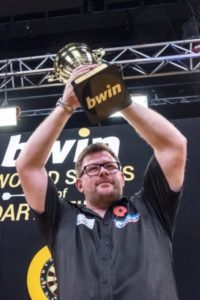 James ranks sixth in the PDC Order of Merit. He will next be playing at the Grand Slam of Darts, where he reached the final in 2016.  The match will take place in Wolverhampton in November and will be broadcast live on Sky Sports. For more information click here

That my son was all for you!